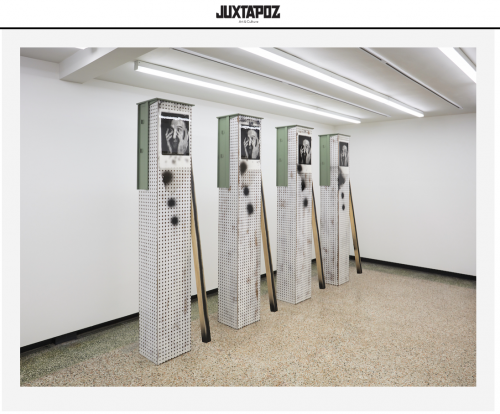 Through an assemblage of obliterated Xerox machines and fragmented typewriters, spray paint, resin and humming hued light, Phil Wagner introduces Obsolescence to the NO Gallery, a nihilistic dystopian reality amidst a mechanical purgatory.

Fueled by the visual rhetoric of Dada and Suprematism, Obsolescence articulates a dialogue of how technology that is viewed as archaic, mundane, and obsolete has become the catalyst of our demise as a society. As a result, sculptures, paintings, and installations create visceral shadows of shantytowns, monuments marred by riots, and laboratories hexed with confusion and absence. By implementing popular wood, anaesthetic architectural addition of the gallery, and site-specific sculpture, the NO Gallery transcends into a chapel of reflection; a memorial pieced together by survivors amongst the rubble.

In the first gallery space, Wagner spray paints the obliterated remnants of Xerox motherboards, filters and screens to canvas, stretched by steel and framed in poplar. With a mechanical ‘flash’, this technique creates cyanotype-like silhouettes of the fragments, resembling dilapidated roofs of cluttered shanty-towns, vandalized, vaporized shadows of a nuclear disaster. Wagner acknowledges Dada, creating work with raw integrity to materials.

[652d47cc44758607750469119e0d8bc8]
Above the exhibition, Wagner integrates a site-specific minimalist sculpture of pegboard, protruding from the office window. This installation is reminiscent of Kazimir Malevich’s Black Square in its debut exhibition at the State Tretyakov Gallery in 1915 in Moscow, Russia. Like the pegboard form, Black Square shares quasi-cubist features, mundane materials, and simplistic geometric composition. Yet most notably, having been installed in the high corner, Black Square additionally surveilled the work underneath.

Throughout Obsolescence, Wagner continues to recontextualize this vernacular by incorporating pegboard with throughout the work in the exhibition to elevate the dialogue. Under the glow amber light, a pseudo-religious space created out of rubble draws the viewer into the next room. Four totemic forms, uniform in material and composition, fluctuate between the notions of the human body and ritualistic monuments. A pillar of poplar wood rests apathetically against a body of pegboard, while at eye level, an image of Marcel Duchamp, stricken with distress, is capped by a locker. Wagner’s strategic application of black spray paint provides a double entendre to the work; an effect making them look hot to the touch or rebelliously vandalized by a riot. Replicated four times, the pillars touch upon ritual and allude to the vapid process of the Xerox machine.

Embodying the human form, the pillars seem to mourn the brutalist destruction of the first room. Through the expression of Duchamp, at eye level, he diverts his gaze of the viewer to the of the exhibition space in 1915 Wagner connote a breath of presence, a dark lens, and primal trypophobic fear of the future, through By doing so, both Malevich and a Suprematist nature that entrance of the gallery, completely encompassed by the fear of which obsolete objects, of which he worshipped in his practice, could cause such a disaster.

Guided by the sound of buzzing of filaments to the top tier of the No Gallery, Wagner assimilates the viewer into this dystopic world through a lab-like installation of Xerox machines and typewriters erected on pillars of smudged pegboard. Its strategic location coaxes intimate, voyeuristic interactions with the work, as the viewer peaks in between the various dimensions of the monuments, feeling the heat of green light at the installation’s centre.

The installation maintains a sense of duality; as a functional laboratory and a religious space. Worshipping the mundane, the monuments commemorate our technological evolution, but also sanctify our obsession with the enabler that catalyzed our demise. This is emphasized through Wagner’s approach to Dada; by gilding only one face of the machine, Wagner honours the authenticity of the once functional object. The green light accentuates the details of these obsolete appliances, and penetrate the holes of the pegboard, creating a cathartic aura of regeneration and growth. The light could be interpreted as an enlightenment, while the buzz and hum are reminiscent of a guttural chant.

Obsolescence urges humans to develop an awareness of the rapid growth and power technology has on our psyche and society. Surveilling our cities with immortal stamina, Wagner questions if motherboards have evolved into matriarchal religions. Yet, by creating a body of work from the shrapnel of this dystopia, Wagner provides a voice of the people that rebuke these implications and provides a space for a new revolution to manifest. —Noa West