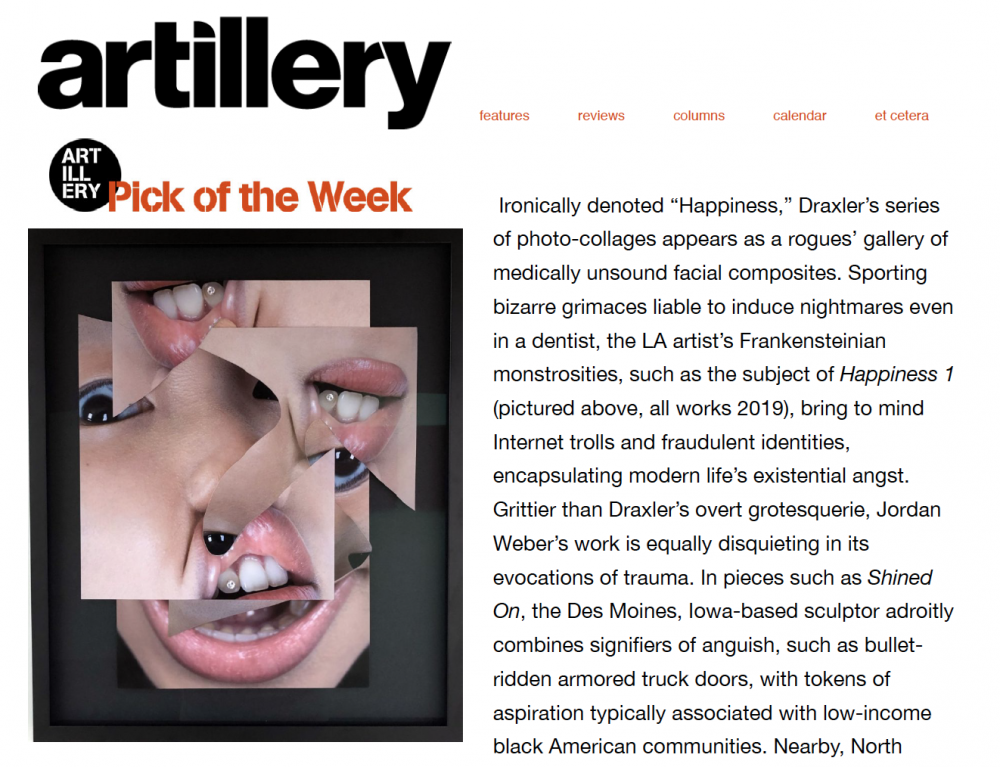 “Don’t Just Do Something, Sit There”

Dark humor pervades provocative works by Jesse Draxler, Jordan Weber and Mark Mulroney in “Don’t Just Do Something, Sit There” at NO Gallery. These artists hail from different regions yet overlap in their hard-bitten manners of exploring mortality and contemporary unpleasantries.

Ironically denoted “Happiness,” Draxler’s series of photo-collages appears as a rogues’ gallery of medically unsound facial composites. Sporting bizarre grimaces liable to induce nightmares even in a dentist, the LA artist’s Frankensteinian monstrosities, such as the subject of Happiness 1 (pictured above, all works 2019), bring to mind Internet trolls and fraudulent identities, encapsulating modern life’s existential angst. Grittier than Draxler’s overt grotesquerie, Jordan Weber’s work is equally disquieting in its evocations of trauma. In pieces such as Shined On, the Des Moines, Iowa-based sculptor adroitly combines signifiers of anguish, such as bulletridden armored truck doors, with tokens of aspiration typically associated with low-income black American communities. Nearby, North Haven, Connecticut-based Mark Mulroney’s colorful paintings satirize society’s obsession with semblance at the expense of substance. In American Likes, a lame, bleeding horse carries a standard-bearing rider. The equine’s skin is ripped away and its intestines have fallen into a pail below; but a casual observer is so occupied by snapping a close-up of its fundament extruding excrement that he hardly notices its wounds—or even his own.