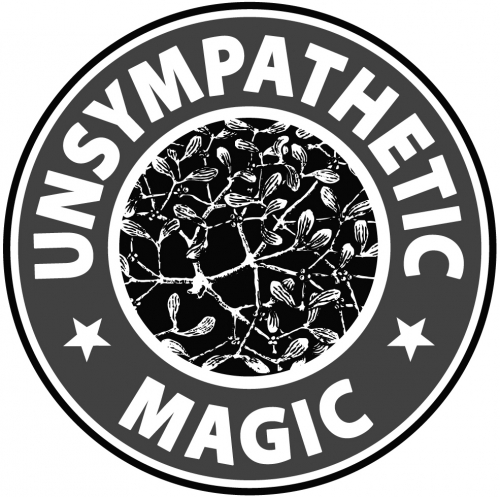 The anthropological concept of sympathetic magic hinges on the notion that like produces like, that our actions will elicit a specific reaction - the pin in the doll will stop the man's heart. Unsympathetic Magic is something else entirely.

The antithesis of specificity, Unsympathetic Magic is a way of living. Rejecting magic as something to be understood, it points to a magical practice that, while indefinable, is rooted firmly in reality. Unsympathetic Magic is slippery, evolving and adapting to a nuanced and ever-changing world. These artists are not playing with casting spells, there is no light as a feather/stiff as a board. They are visionaries, shapeshifters, channellers, transcenders, multiversal worldbuilders, agents of their own destinies.

Cameron’s Staghead casts an eye back to the emergence of American occultism, a new understanding of symbols and the development of a new holistic magical thinking for the modern world. Her hand conjures hallucinations, the window to our anthropomorphic tendencies open up, if only for a second. From Cameron’s backward glance, Vincent Dermody drags us firmly back into the contemporary landscape. The artist's sculptures evoke a swelling, organic mass lurching through the postmodern landscape, fragments finding homes in the physicality of a life. Genesis P-Orridge, founding member of Thee Temple Ov Psychick Youth exemplifies a firm understanding of the relationship semiotics has to magical thinking, evoking a churning reality ripe for intervention. Berman’s psychedelic brushstrokes swirl in motion with Sara Kathryn Arledge’s dancing figures, while L’s spells synergistically combine everyday objects into incantations that shift events, consciousness, and states of being. André Eugène’s sculpture reveals the cyclical nature of it all, the duality of lived experience under constant awareness of our shared journey to a place of rest.

Unsympathetic Magic brings together a diverse group of artists, each a life lived in the scope of magical thought and its application to the contemporary world. They reject plaid representations of magic in practice, living as an embodiment of magical thinking as a worldview.

Sara Kathryn Arledge (1911-1998) - BA University of California, Los Angeles, Columbia University, The Barnes Foundation. Highlights: The Armory Center for The ARTS, US (2019) The Speed Museum, US (2019)

Vincent Dermody (b.1973) - BFA The School of the Art Institute, Chicago IL, MFA University of Illinois at Chicago, Chicago IL. Highlights: Dermody's work has been the subject of a major feature in Artforum as well as group and solo exhibitions nationally and internationally.