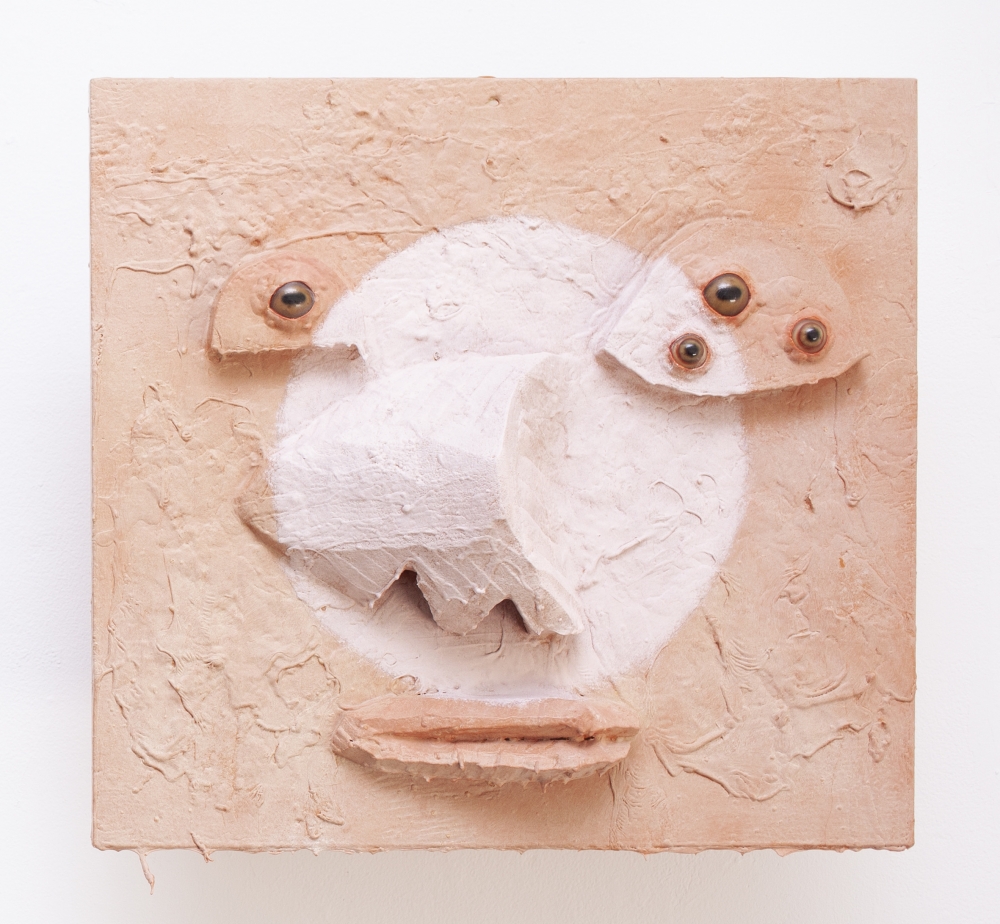 My white friend
My black friend
My computer friend

The show title, “My white friend, My black friend, My computer friend” shifts the position of the reader from that of a person who is assumed to be non-white and have only one white friend, to a person who is assumed to be white and have only one black friend, to the shared position of any of us who has a friend via digital media or a person who is socially isolated and friends with their computer. It reflects the pleasures and alienation that comes with living in a society that is both diverse and self-segregating. This title also follows the formal logic of my indexical paintings, an emotionally distanced listing of similar possibilities accompanied by a subtle shifting of the subject and position of the viewer. This exhibition contains five works which utilize three different stylistic approaches.

Hitler Index is a painting with five horizontal rows of three to eight different Hitler cartoons on each row. They are all painted in shades of green to reflect his putrid and alien position in contemporary culture. I grew up watching The History Channel, which my grandpa and father jokingly refer to as ‘The Hitler Channel’ because its most consistent programming centred on fetishizing Nazi Regime power. Despite the abhorrence of Nazi atrocities, American white male culture retains admiration for Nazi efficiency, extremism, and dominance. This is evidenced not only in The History Channel programming but in the ongoing propagation of Hitler and Nazi images in anti-immigrant groups, aggressive adolescent drawings, Halloween parties, leather daddy aesthetics, heavy metal, and past conversations. My interest in painting Hitler was not only to document this persistence but, conversely, to illustrate the extent to which this icon’s meaning has become unbound from its origin. Hitler’s caricature image has propagated to k-pop, manga, memes, film, theatre, painting and sculpture.

Penis Modification Index is a mostly pink, blue and purple painting on a white background with five horizontal rows and two different paintings of penis modifications on each row. The penises are based on photographs of genitals which have been physically abstracted; a scrotum plug, testicle weights, tip studs, and several types of penis subincision. In rendering the photographs, I have chosen a range of painterly styles: Expressionist, illustrative, Surrealist, Pop, Cubist, etcetera. I made the painting because I was curious about this practice, I wanted to know why it is done and in what social contexts. From my reading, I learned that it will be done as a function of tribal rituals, a personal search for sexual identification, a desire for more intense forms of physical pain, a desire to increase the sensitivity of the penis, or a desire to separate the part of the penis which receives pleasure from the part which is used for urination. All of these relate to extremes of what I imagine my own masculine sexual experience could be and feel linked to the extreme masculinity of the Nazi regime. The painting, through its poetic triangle of emotional, physical, and stylistic abstraction, helps me to reframe what Abstraction is as a process.

Caucasoid Facial Abstraction is a sculpture of a face made from wood, foam, four taxidermy goat eyes, covered in house paint and painted with hyper-real Caucasian flesh tones. The head is squarish, but the eyes, lips and nose are each enlarged and blocky, semicircles. The work is a melding of Western Modernist Abstraction with Caucasian skin tones, a sort of melding of the audience and objects at American art museum gala. The title word ‘caucasoid’ refers to Nazi and contemporary white supremacist obsessions with Aryan genetic ancestry. I made this work in 2015 as part of a larger group of sculptures in which I turned kitsch tribal abstraction masks and odd blocks of wood into varying flesh-toned faces and limbs. Most of the work I’ve been reticent to show because I’m unclear as to what they mean or do to an audience, however, they were recently used as props in Kandis Williams’ ongoing performance work: ‘Euridice’.

Betty Joe Shelby, Pantones 40002UP, 19-40052TCX, 20-0026TPM, 20-0030TPM, 18-1438TCX is an oil painting of a horizontally squished or vertically stretched white female police officer’s head with five eyeball sized Pantone dots highlighting a specific colour tone that exists under the respective region of the painting. The image of the police officer has been cropped at the bottom of the neck just above the collar, with the point of the jugular notch resting on the pedestal. The sharp pointed neck and descending drop shadow turns indicates that the volumetric head is a flat, digitally sourced, image. The pastel white and graphite grey shelf accompanied by the raw canvas background contrast with the saturated color and thick oil of the police officer making her feel like she exists in a separate aesthetic universe. The canvas and plinth become an antiseptic presentation space for the policewoman image/object. I horizontally squished the image because Betty Jo Shelby is a murderer and I want to minimize her presence in the room, but I painted her because it I think there should be more images of affable white people who have committed violent crimes. I believe it will help us whites to have a self-image which is truer to how we are seen by the majority of the world. The title describes the five Pantone dots on Betty Jo Shelby’s face, they a numerical index for categorizing her identity, a Caucasian person dressed in blue. I also thought that most collectors won’t want a picture of a state murderer in their home so I was hoping the abstraction of squishing and monochrome dots would make the work exist more easily in a home or collection. –This squishing, which minimizes a physical presence without minimizing an emotional or historical presence reminds me of what it’s like to read the news. A quick litany of events condensed to maximize the amount of news and advertisements we can absorb in a passing moment, and the feeling that no matter how good or bad any one of those is, it will quickly be compressed in our phones and our memories to make room for a new event.

Positive Black Figure is an oil painting of a cartoon dark-skinned Wonder Woman on a plinth with a raw canvas background. The title refers to the current genre of positive black figuration in contemporary art; a genre that is in the process of becoming central to art history and the market. Minus the squishing effect, this painting essentially uses the same visual structure as the Betty Jo Shelby painting. The Wonder Woman’s abstraction style is close to that of Minecraft but it is technically called a Cubee. A Cubee is a figure composed of five cubes: a small one for the legs, a medium one for the torso, a large one for the head and two elongated ones for the arms. I had recently read Mandy Harris Williams (@idealblackfemale) posts about ‘Nasal Normalization’ and pre-eminence of European facial proportions in representations of beauty. It motivated me to make the Wonder Woman have an African nose and dark skin, as opposed to the monochrome caramel and European nose of most Nubia Wonder Woman cartoons. I think the Cubees reflect the simultaneously infinite information and crude flattening of our identities that exists in mass media. This Wonder Woman also feels like an antidote to the morbid presences of the other paintings in the show, but in doing so, it returns the dark-skinned female figure to the common American role of being the spiritual saviour.